Since her launch in 2019, HMS Tamar has enjoyed a sincere and close relationship with her affiliated county of Cornwall. This is seen by the way the county has evidently taken her to its heart, and the appreciation is palpable.

The Royal Navy made a point of allowing the ship to first raise the fabled white ensign while she was on the River Tamar on 4 June 2020, and the striking dazzle livery was applied while the ship was alongside in Falmouth on 7 July the following year. So in many senses the ship’s identity has been cast and made in her home county.

HMS Tamar is on an enduring mission for Global Britain and the Royal Navy. She has been permanently forward deployed to the Indo Asia Pacific region and departed the UK for an initial five years in early September 2021. After the initial fanfare of her departure from HM Naval Base Portsmouth, the ship made a point of ensuring her final UK port visit before pushing westwards out towards the Panama Canal was to Falmouth. While there, Colonel Edward Bolitho OBE, Lord Lieutenant of Cornwall, honoured the ship with a visit, as did Councillor Steven Webb the Mayor of Truro, which is HMS Tamar’s affiliated city. In a delightful gesture, all manner of Cornish provisions were delivered to sustain the ship’s company and also act as a touching and tangible gesture that those at home were supporting the ship during her important mission. The generosity was not lost on the sailors as they enjoyed Cornish saffron buns on the jetty in the blustery autumnal weather. At least hearts were warm and spirits high! 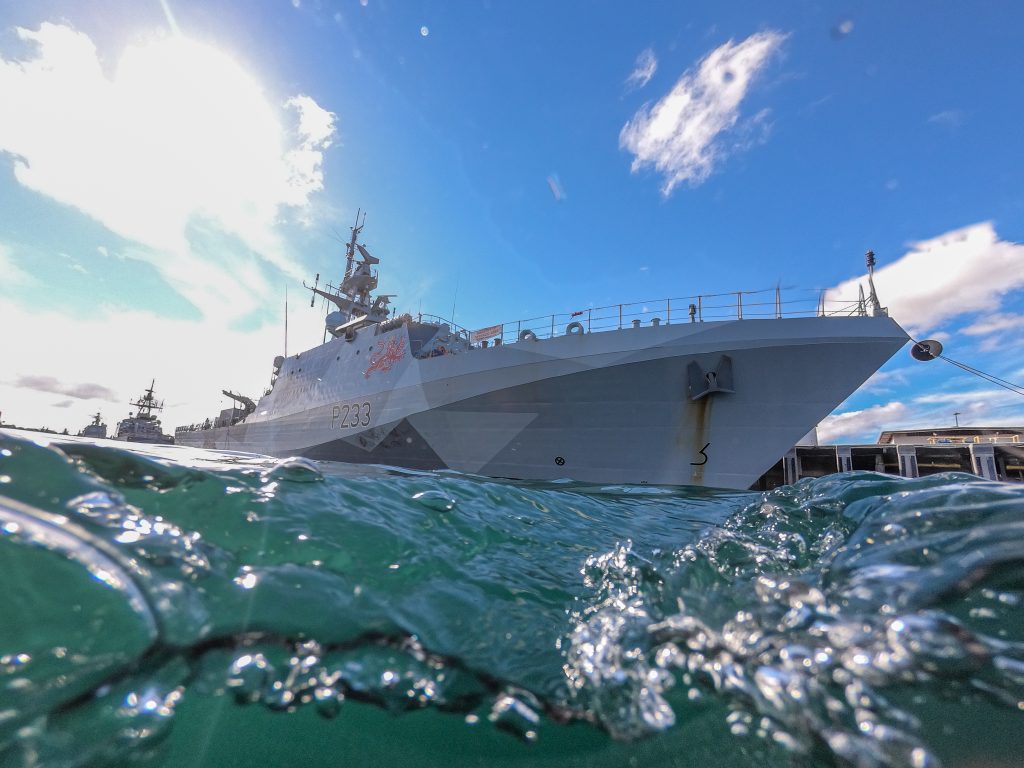 HMS Tamar and HMS Spey alongside Pearl Harbour Naval Base having departed the UK in early Sep 21 to transit West across the Atlantic, through the Panama Canal and into their Pacific Ocean Operational Area.

Since then, the ship/county affiliation has remained highly active and continued to thrive. As the ship left UK waters for the last time, she was given an afloat escort by Rear Admiral Mike Wood CBE DL, Chair of the China Fleet Trust and Deputy Lieutenant of Cornwall. The Trust has been instrumental as a major conduit to the ship’s county engagement, through the China Fleet County Club, the County Council and the Lord Lieutenancy. This was recently evidenced in securing a Christmas ‘care package’ consignment of provisions from prominent local providers, all of whom are keen to support their affiliated warship overseas. In return the ship is engaged through visits and newsletters, and will participate in Falmouth’s hosting of national Armed Forces’ Day in June 2023. Most recently, key members of the ship’s company have been honoured to be officially enrolled as Cornish Ambassadors overseas, highlighting tech, innovation and industry as county successes alongside well-established tourism.

There are plans for local school engagement and other initiatives. The ship may be out of sight but is clearly not out of mind, and it is important that each party carefully tends to the strong advocacy they share for each other. The affiliation is certainly vibrant and has never been on a stronger footing, so we can declare with confidence that the HMS Tamar/Cornwall affiliation is in great order!